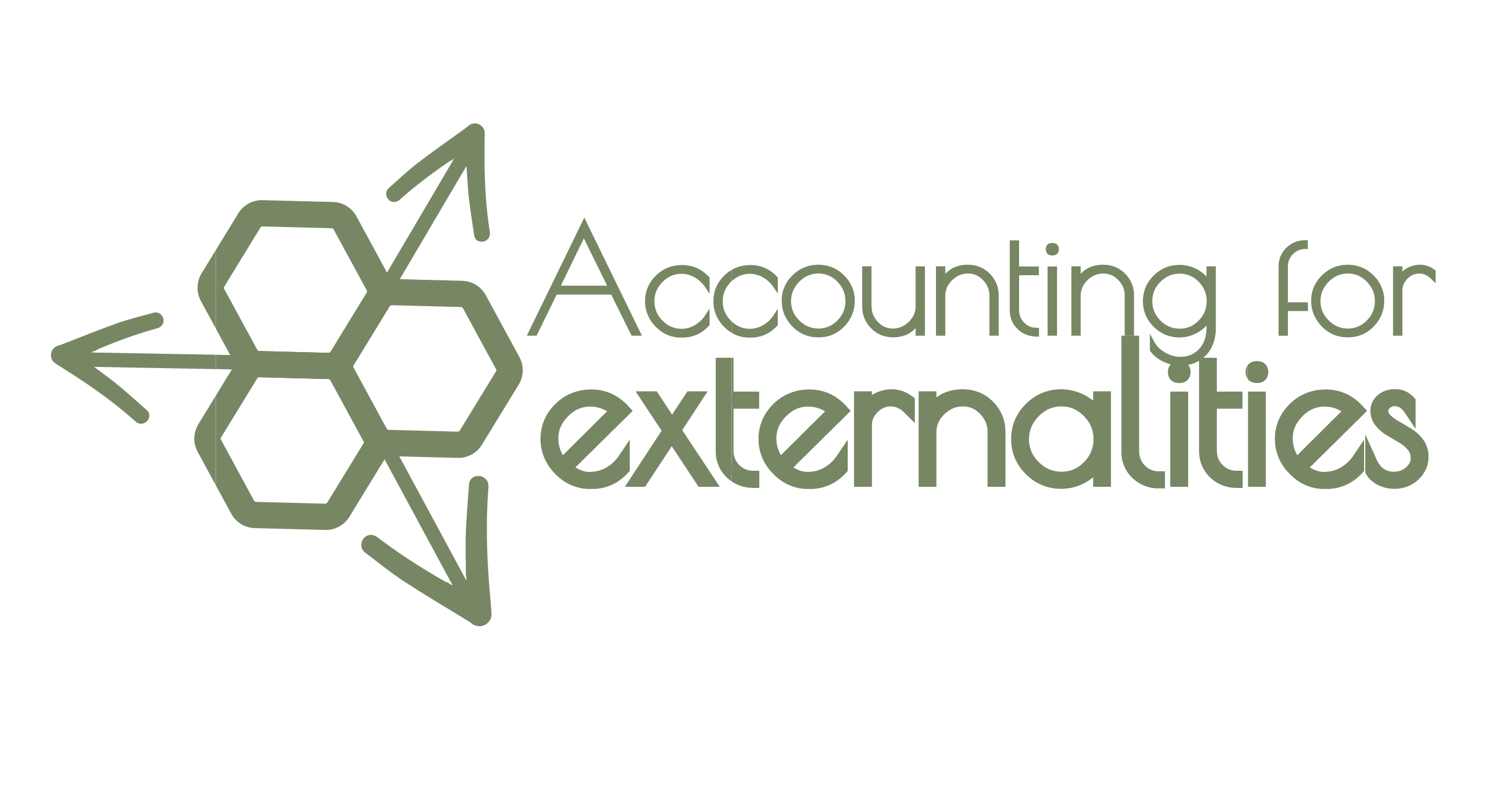 Accounting for Externalities > English > What is an externality ?
Some Escherichia coli make people sick by producing a substance that is toxic to humans. Nevertheless, naturally present in our intestines, they are indispensable for our digestion, and would even have an impact on our brain. They are our hosts, and allow us to survive.
In biology, this type of association, found in varying degrees, is called Symbiosis or mutualism.
In economics? It all depends on the bond that unites the two spouses.
Thus one speaks of synergy, when the marriage is established (between 2 units of the same grouping).
If there is no link, we speak of (positive) externalities.
The notion of externality stems from the observation that certain economic impacts escape from transactions. External persons without any decision-making power can thus become poorer or richer. Introduced by Sidwick in 1887, it was then developed by Pigou, Viner, Coase (with his eponymous theorem), Hirschman, … the externalities are one of the main issue of our economic system: something not really defined, but having an important impact on our lifes and ecosystems, as economic agent, citizen and animal.
We will see some definitions of externalities, followed by some examples.

There are several definitions of externalities, with small variations, but these variation can have important impacts on the interpretation that could be made.
We will retain this one:

An impact, positive or negative, on any party not involved in a given economic transaction or act.

We therefore have two characteristics for externalities:
An externality is a non-accounting event (accounting is mainly based on commitments, that does not exist in the concept of externalities). It is the consequence of the (imposed) mutualization of a good: if everything were well compartmentalized, watertight with contractualization as the only means of exchange, then there would be no externality.
Another way to define it, is to compare the private costs (costs incurred by economic agents) and social costs (cost incurred by the society). The difference between the two costs is the externality value.
Few example

The beekeeper and arboriculturist (James Meade)

This example of (positive) externality was proposed by James Meade.
It is based on the informal collaboration of a beekeeper and an arborist.
The beekeeper benefits from the proximity of the arboriculturist and obtains better quality honey that he can sell at a better price and for free. The arboriculturist will not be paid for the indirect service he has rendered to the beekeeper. This is a positive externality. But the arboriculturist also benefits free of charge from the pollination of his trees, which improves his yield without having to resort to costly manual methods, and the random pollination of bees also enriches the genetic diversity that allows plantations to better resist other diseases or ailments.
From the beekeeper’s point of view, we can illustrate this with the following figures:
A beekeeper, in a neutral environment (equal to the average) can expect to produce 10kg of standard quality honey (10 € per kilo) per hive and per year (i.e. 100 € per year per hive).

His neighbor is a farmer, and has 2 possibilities:

From the beekeeper’s point of view, no transaction takes place, and his power of decision on the investment choices of his farmer neighbor is nil.

In the first situation, he can hope to sell a honey of better quality (thanks to the fruit trees), but also have a higher yield and thus sell 11kg of honey at 12 € per kilo (per hive and per year). The externality can therefore be evaluated at 11kg x 12 €/kg – 100 = 22€ / hives and per year.
In the second situation, the insecticide (gaucho) can decimate the hives, so the negative impact is: 100 € / hives and per year. Nevertheless, this can be compensated by a compensation / fine that the farmer has to pay to his neighbor. In the case of an indemnity of 80 € per hive per year, then the net balance of externalities is 20 € per hive per year of losses (negative externality).

The second example shows that the first complexity of the notion of externality is the linkage of the externality to events (transactions), that could lead to its evaluation. It is therefore necessary to group together certain impacts in order to evaluate them properly.

How do we deal with these externalities?

According to economic theory, there are two ways of treating externalities:

According to Coase, externalities can be transformed into tradable goods (the externality is thus included in a negotiation and can disappear if the transaction relates to a known event), has two conditions :

If we take again the examples from above The beekeeper and the farmer: we can in this case (in the absence of neighbors and third parties), imagine that a negotiation takes place and that the additional profits obtained by the beekeeper and the farmer are distributed in an equitable way (via a cooperative for example), but this supposes that there are no other stakeholders in this decision, and that the additional profits are known and stable,

Coase’s theorem provides a better understanding of the notion of externality: its applications nevertheless remain marginal, faced with externalities with ill-defined contours (property rights often unclear: complex monitoring and measurement and so, high transaction costs), and which consequently escape all negotiation.
In cases where property rights are difficult to define (for example, what right do I have over the air I breathe?), and therefore in all cases where property is a common good, then the State can be a substitute, and:
Whether it is the case developed by Pigou, or the example of Coasse, both deserve to be discussed in the context of a complete article, on their work, the consequences, and possible extensions.
Next PostFreeriders and parasitism in economy
0Shares
DefinitionExternalitiesExternalitySustainable development